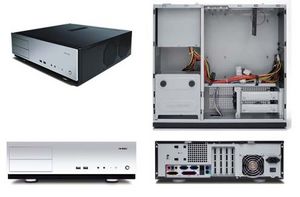 The Antec NSK2480 is a desktop, micro-ATX case. It comes with a high-efficiency 380W power supply.

It has two 5.25" bays on the front. I filled mine with an iMON VFD/IR and a DVD drive. The bays are in a cage that is easy to remove and insert. Running the power switch cable to the iMon was a little tricky, but doable.

The case has room for two 3.5" internal drives. The drives sit vertically, screwed into silicon grommets to reduce vibration noise.

The front panel has two USB 2.0 ports, audio out, audio in, and the usual reset and power buttons. The power LED is circular, surrounding the power switch. The disk activity LED is bright blue.

The case is similar to the Antec Fusion, but without the integrated iMon.

The main bay is cooled by two 12cm fans. I use only one. Antec includes a plastic panel you can use to replace one fan.

The case keeps the power supply separate from the mainboard, so one doesn't heat up the other. This is a nice feature and lets all the fans run at low speed, but it does make for cramped quarters inside. Nonetheless, I was able to install the mainboard with a Zalman 7000 cooler, and connect everything without bloodying my hands. (I have arthritis, which makes me clumsy, so I often end up with small cuts and scrapes when I assemble a system.)

The power supply has only one SATA power cable. I had to use a Molex-to-SATA adapter because I am using a SATA disk drive and a SATA DVD drive.

I think this case makes a fine MythTV frontend-only case.