Now that the Myth box is finished, how do I connect it to my cable, DirectTV, dish or satellite provider? How do I change channels and how does Myth know how to change channels on my cable or dish box (commonly called STB for Set Top Box)?

There are several ways to connect the Myth backend to your TV provider, various HOWTO articles are scattered about the internet. This page will not repeat all of that but hopefully tie it all together. The user manual barely touches upon this important subject, I hope someone will link here or get started there.

Your capture card is normally a TV Tuner card meaning it can change channels as well as capture the video and audio. However when connecting to cable or satellite, you may instead use the provider's Set Top Box (STB) to tune the stations and your tuner card works as simply a capture card and remains tuned to channel 3.

1. FireWire. MythTV supports a Firewire connection to your cable or satellite box, if your box supports it. This configuration is often used for HD recording. Over firewire Myth knows how to change and tune channels. In this configuation you don't even need a tuner card! However you will only get certain channels -- not all. Only the "unencrypted QAM channels". Your cable box or satellite box needs to have a working firewire port.

2. Direct coax. TV tuner cards have a coax connector and you plug the coax from the wall directly into the tuner card. In this case your capture card also does the tuning. Myth uses the card's driver API to request channel changes. If your TV provider requires a cable or satellite box, you probably will not be able to get all channels directly from the wire. If you use a cable ready TV and you currently plug directly into it from the wall, then this method is all you need.

3. Coax from the STB (Set top box) to the tuner card. This connection means that your STB can decrypt the signal, and any station you can get on your STB you can get on your capture card. This situtation requires an IR blaster device (or possibly a serial cable) which Myth will use to change the channels on the STB. You will probably have to leave your STB box on as well.

4. Svideo/composite/RCA cables from the STB to the capture card. Similar to number 3 above. In addition, you will need an audio in jack on your capture card as well as an Svideo in (or composite in). Your STB should already have these audio out connector and Svideo or component out for supporting a VCR or other device. In this setup, you will also need a channel changer (IR blaster or possibly a serial cable) and channel change script so that Myth can change the channel on the STB.

How Myth sees these

The Input connections choices in mythtv-setup are shown below. Note that my PVR 250 (MPEG : /dev/video1) has several input connections I can use, including Tuner 1 (coax in) and Svideo 1 and Composite 1.

In the MythTv setup program (mythtv-setup) you define Tuner cards and Input connections. The inputs are the different ways you can connect to your card, such as the coax port (tuner), the composite or svideo port (combined with audio in). On a single card such as the Happpauge PVR 250, you can use both cable in and svideo in, not at the same time though.

Additionally Myth has you define 'Video Sources' which in the US are connected to Data Direct or Zap2It Labs channel lineups. You can connect each Input source to a different channel lineup.

Below is the configuration page for an input source. After you choose an input connection to define, you can specify the channels associated with the input source and you can optionally tell Myth how to change channels. 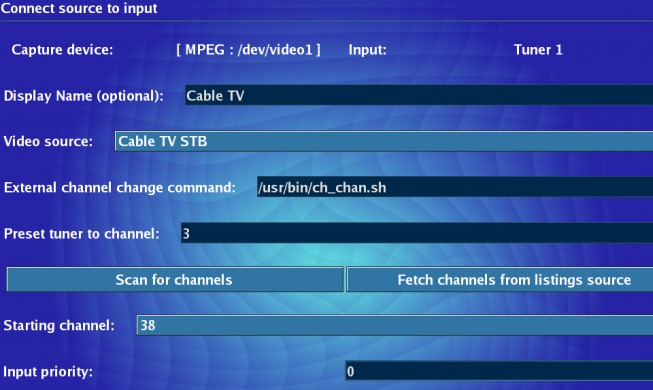 If you leave the "External channel change command" box empty, then Myth will tune it using the IVTV driver or API for your card. The exernal command is required when you have a set top box and an IR blaster and you need to call lirc to change the channel on your STB.

FireWire is the often the first choice for HD. This is because programs captured over Firewire won't incur a quality loss from having been decoded and reencoded. Cable providers vary in the number of channels that you can receive over the firewire port, normally you can get the local HD broadcast channels and some SD broadcast channels. You will find out when you set it up which channels those are.

You will not need a channel change script if you have one of the MythTV supported boxes, including the Motorolla DCT 6200 and several Scientific Atlanta boxes. However there are improved scripts and contributions channel changes which you can find by searching the wiki.

In mythtv-setup you will define a tuner card of type Firewire. You can choose from different predefined Set Top Boxes. You should create a separate input input source and video source. In the video source, choose a custom lineup that you edit to include only the unencrypted channels you can receive over firewire.

The Wiki FireWire HOWTO covers everything you need to setup firewire. Search for other links as well in the wiki.

It's always good to read some words from Jarod

Coax from the STB

If you have a PVR-250 or similar tuner card, you can run a coax cable from the STB output labeled "to TV" to the coax or 'antenna' input tuner card. This means you cannot use the PVR 250 to change channels, you need the STB to change the channels, while the 250 remains tuned to channel 3. To tune your STB, you will connect an IR blaster to a serial port on your Myth box and tell Myth to change channels using a script.

An IR blaster is an Infra Red emitter. It is a small version of your TV remote control. Usually you connect it to the serial port on your Mythbox and point it toward your STB's IR receiver. This way Myth will be able, via lirc, to send the channel change command to your STB.

More info on the IR Blaster setup is found here on the wiki Using_an_IR_Blaster_with_MythTV In the links contained you will find info on where to buy or make the serial IR blaster and set up the channel change script. If you use DirectTV, see this link: Controlling_DirecTV_STB_via_USB

Svideo or Composite from the STB

You can use the component out or svideo out from your STB to connect to your TV Tuner card if your card supports it. The Hauppauge PVR-250 does. It has component in, Svideo in, and audio in (mini). This means you can run an Svideo cable and audio cable from your STB into you PVR 250. Often a STB will have component out for audio, and you can use an audio Y cable to convert from the two RCA Right and Left outputs to a single mini input.

In this setup, you will also need an IR blaster and channel change script so that Myth can change the channel on the STB.

To start you might want to set up your data direct lineup to include the stations you can get on your STB. Then run the setup program mythtvsetup to configure the Input Connection. There are pictures above of the MythTV setup screens for choosing an input source and configuring the input source.

MythTV must be able to control multiple set top boxes independently so care must be taken to ensure identical makes and models can be differentiated by LIRC and not receive the same commands which result in unwanted channel changes across all devices.

Multiple IR blasters can be set up using multiple LIRC instances, or multiple cables can be used if the STBs have an interface. One USB device CommandIR Mini has 4 LIRC software selectable IR emitters which works well.