I have been watching the development of MythTV from the sideline for a few years every now and then and have finally decided to put together my own HTPC. Below you can find the specs of my system (being build). 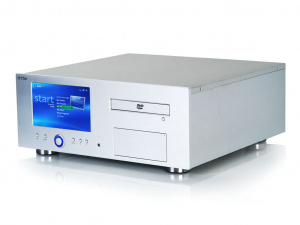 I just ordered the OrigenAE X15e case for my HTPC system, which will be using MythTV. To match with my other audio devices I ordered a silver one (it is also available in black). As I do not like to have my TV on all the time when selecting a radio station or other audio to listen to I really like the build in TFT screen in this case. The case is made of high quality bezzeled aluminium and the current version (V2) can hold up to a maximum of 4 harddrives, one optical drive and a card reader at the same time. The case is a bit high but this allows for the use of normal PC cards to be used upright. This case comes with a remote control that is driven by IRTrans. They also provide drivers for Linux systems. Using the Alchemy_LE_Ubuntu_Netboot#IR_Receiver_and_VFD page I was able to get the remote control running on my system quite easily.

Note: Please read up on installing the IR Receiver as it provides you with a view vital clues to get the remote controller running quite easily.

For more information on the case have a look at the OrigenAE website.

To store enough data and have a fast harddisk I bought a Seagate SATA disk with a capacity of 500Gb and a throughtput of 3.0Gb per second. On top it is a very quite disk which is a benefit as I am trying to build a system that looks nice and is quiet.

I have chosen the Asus M2A-VM HDMI motherboard as at first glance it seemed an excellent choice as it had a lot of desired functionality build in, like a videocard, but also a HDMI and DVI output. Unfortunately after installing MythTV and trying to get everything to work it seems a little less excellent, mainly because of problems getting MythTV to work with the build-in ATI Radeon X1250 card, which as I found out is not supported MythTV. It has to do with some problem with the AtiProprietaryDriver which does not fully support the on board graphic card.

I recently tried to upgrade my box to 4Gb of memory and experienced serious problems, the system would not even boot properly anymore I started investigating the problem. At first I thought it had to do with the SATA drives in my RAID configuration as I also added a couple of hard disks at the same time. I was experiencing "ata1: Soft reset failed messages:" for all drives. After a long and tedious search I stumbled on this post mentioning a problem using over 4Gb of memory and after reducing the memory to 2Gb I was able to boot again.

As the whole goal was to install MythTV on this system, the OS has to be some flavor of Linux offcourse. However with this motherboard I had problems installing some of the common Linux flavors like Fedora and Ubuntu, even with a wide array of boot options found as suggestions on the internet. Eventually I discovered that Centos 5 worked almost out of the box, so far it seems that I do not need to use any boot options to get my kernel booted.

As it seems that the on-board ATI Radeon X1250 video card has some problems in combination with MythTV I will probably by a NVidia card as these have been reported to function properly with MythTV. After having a lot of trouble getting my on-board video card to work with MythTV, especially live TV and watching recordings using the MythTV interface, I decided to buy a nVidia based graphic card, with which I eventually still had freezing frames while watching live TV and recordings.

I also noticed I still had the following error message:

After Googeling on this string in combination with nVidia I hit the Troubleshooting:NVP: Timed out waiting for free video buffers in the MythTV wiki, which I had found before but then made no sense as I was using an ATI based card.

The first option suggested of disabling did not bring much releaf, the whole systems still freezes and I had to kill mythfrontend to get control over my system again. The second option however solved my problems in the end. I know it is not advised, but as a quick check I renamed the /dev/rtc (real time clock) so Myth TV can not find it and will not use it. Immediately I was able to watch Live TV and recordings I made earlier.

I bought a Hauppauge PVR-500 tuner, as this tuner has two tuners and a FM tuner (but unfortunately radio does not seem supported in MythTV although there is a page on wrapping FM radio into MythTV using the PVR-150 card, perhaps something to develop for the future) and also has the ability to do hardware MPEG encoding which will save some CPU use.

Although I have some problems getting my videocard to function properly with my TV (which prevents me from watching liveTV and playing recordings using MythTV) I have already been able to record some episodes and the tuner seems to function very good. It seems to have a clearer image than when watching television on my TV directly.