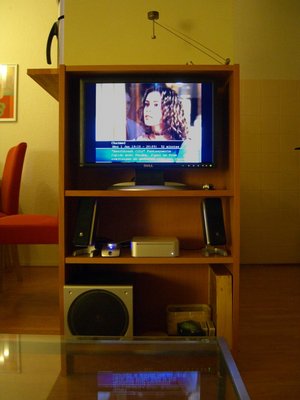 This Diskless Mac-Mini Howto should allow you to netboot a Mac Mini MythTV frontend (powerpc, not the newer intel mini!) from a Fedora 4 server, without altering anything on the Mac Mini's disk. This howto uses a script to install the netboot environment for the mac-mini, this script has only been tested on fedora core 4 (fc4), however it's very likely that it will work on any distribution, as long as rpm and chroot are available.

This is a work in progress... At the moment this guide should allow you to netboot a Mac Mini from a fedora 4 server, without altering anything on the Mac Mini's disk. OS X will remain functional, so this is a great way to experiment with a linux mythfrontend on a Mac Mini. The fedora 4 server does not have to be a ppc platform, in fact, this howto will only work on a i386 (or x86_64 with 32bit compat libraries) system. The script is known to work on fedora core 4, but should work (with perhaps some minor modifications) on distribution for which rpm (the redhat package manager) is available.

At this moment, this should allow you to run a stable mythfrontend (both 0.18.1, and 0.19, and 0.20 which is the default). Please note that it is also possible to run an OS X frontend (Myth on Mac OS X), you can get binaries at: thesniderpad.

Minor problems at this moment:

Although this is a bit experimental, it shouldn't be too hard to get things working. If you are a complete linux noob, and terms like dhcp, named and so forth mean nothing to you, then it might be a bit of a challenge.

You'll need the following packages installed on your server:

Now, download the collection of scripts and tools to build the diskless environment: diskless-0.4.tar.bz2 (my DSL link is a bit slow, but the file is not big...)

On the discussion page you'll find a comment from Klaus Weidner about static ip. I'm still not sure if it's necessary to define a static ip, on my system it seems to work with a dynamic ip. Mythtv uses the hostname, and the netboot script installs files in a directory named after the hostname, not the ip. Anyway, if a dynamic ip is troublesome for you, use a fixed one, by adding these lines to dhcpd.conf:

and remove these lines:

For netbooting from this server, two NFS exports are required, one directory for the static root file system, and one directory containing a snapshot for each diskless system booting from this server. Add these two lines to /etc/exports (my domain is steadydecline.net, change to your own, the script defaults to using fc5 on the mini, if you change this to fc4 or fc6, then also change the exported directories):

Note: re-exporting the filesystems doesn't always work for me. If this won't work, just restart the nfs daemon

Now a whole bunch of files will be downloaded (only once), and a diskless enviroment will be built. Somewhere you'll be asked for a password for vnc. Remember this password, you can use it later on to connect to the macmini with the vncviewer program. After this is done, copy the kernel, the initrd image, the bootloader and the bootloader config to the tftpboot directory.

Note: the yaboot binary included in fc5 has been a bit troublesome for me, it just puts me in the openfirmware menu instead of booting.. I have no idea why this happens, and if its limited to my machine. If the same happens for you, just copy the yaboot binary from the fc4 package. It's located at /usr/lib/yaboot. You can use midnight commander (mc) to extract it from the rpm.

Note: If the mini can't boot from the net, then it will wait for a very long time (around 10minutes I think) and then boot from the harddrive. So you can't really ruin your mini with these lines. Although it may seem dead for some time, don't panic! Just wait, and restore to normal boot behaviour with the line shown above.

The first time you netboot the mini, a lot of data will be copied (~500MB), also the bootscript will generate the module dependency list, and dynamic library cache. Depending on your network speed this can take upto 60 minutes! The new version of the bootscript (version: diskless-0.3 and higher) forces a reboot after all the copying is done, to use the newly generated modules.dep and ldconfig.cache.

This compiles mythtv +plugins and mplayer, and installs them in /usr/local. This will take a long time! Moreover, it might crash if your mini has only 256MB of memory (mine has). If that happens, do the following:

or even easier just reboot the mini:

Now your Mini is a fullblown MiniMyth frontend! Mythfrontend should start automatically on boot. You can use vncviewer to control the mini, or set up a decent lirc configuration. Make sure to use 'ALSA:default' as the sound device, also set the mixer to 'default'. Oss emulation sounds ugly! If you got this far, and your setup is working, don't forget to report it in the table below!