MythTV has limited support for AirPlay for streaming audio Apple iTunes to MythFrontend. Previously, iOS devices (iPhone, iPad) were able to stream to MythFrontend as well but changes in recent versions of iOS now prevent this.

Note: AirPlay (and MythTV in general) do not support DRM encrypted videos such as those purchased via the Apple Store. Playback of such content will fail.

AirPlay was originally called "AirTunes" when it only supported streaming music. MythTV support was added in version 0.25 and substantially enhanced in 0.27.

AirPlay is a proprietary format and is encrypted...but the encryption key has been discovered which enables its use in open source applications such as MythTV.

When starting the frontend, you will get the following message in the log:

You can obtain the key from the shairplay source. Copy the entire section:-

Paste into a new file at /home/<user>/.mythtv/RAOPKey.rsa and restart your frontend.

Connect your iPhone or iPad and your Apple TV [MythTV frontend, in our case] to the same Wi-Fi network.

iOS 7: Swipe up from the bottom of the screen to show the Control Centre. Tap the AirPlay icon and select from the available AirPlay devices. 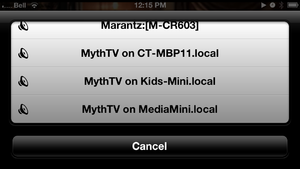 If the AirPlay icon does not appear in the Control Centre, it may appear inside supporting applications. YouTube, Pandora, etc will show the AirPlay icon within the app if a supported target device (MythTV in this case) is detected on the network.

In iTunes, AirPlay is enabled by the same icon, which should appear in the lower right corner of the window.

Note that AirPlay Mirroring is not supported.

Apple made changes in recent versions of iOS that disable the hack the Myth has been using. There is no known workaround. Airplay from iTunes to MythFrontend continues to work at least with iTunes 12.6 on OS X.

Can't Start / Nothing in frontend logs

Ensure mythfrontend is listening on a network-connected interface, especially if you see initial startup logs that imply AirPlay is active, but you can't get any further. If you have a combined backend/frontend system, you may have a local IP address specified in mythtv-setup -> General (e.g. 127.0.0.1 for IPv4 and ::1 for IPv6), which means mythfrontend isn't listening on any interfaces that are reachable from your local network. Usually, this can be solved simply by checking the "Link-local" box on the same mythtv-setup page, which instructs MythTV to listen on IPv6 addresses that are reachable on your local network. However, this requires that you have IPv6 enabled: check that at least one network-connected interface has an IPv6 address (e.g. "ip -6 addr").

AirPlay may also work without IPv6 so long as mythfrontend is listening on a network-accessible interface (e.g. 192.168.0.2). This is unclear, though. You can try setting the IP addresses specified in mythtv-setup to a network-accessible one, or else leave those fields blank to allow MythTV to choose sensible defaults.

After changing IP addresses, a restart of both the backend and frontend is required.

Of particular note is a peculiarity for Gentoo users: 'avahi' [1][2] is a required dependency, yet the current MythTV ebuilds ignore both the 'airplay' and 'avahi' USE flags. Instead, the 'raop' USE flag must be set to enable AirPlay support.

Not seeing AirPlay device in iTunes

On Linux/FreeBSD, make sure the avahi daemons is running. On Windows, that the mDNS service is running

A message like the following in your logs would show, you can then lookup the error code below

When using MythFrontend on OSX, you may not experience perfect audio playback, this issue is linked to a bug with IPv6 in the Qt software framework used by myth (Bug 25634)

When seeking on some online content, such as when using the YouTube application, may result in the frontend showing "Searching..." and become non-responsive. You can usually interrupt it by stopping playback on the iPhone and restarting it.