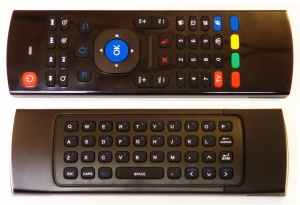 The unit has a quirk in that it shuts down if a button is not pressed for a minute or so. This obviously saves the battery but it is necessary to press any key to get it started again. In practice, this means that a key is pressed and, if nothing happens, it is pressed again. On some units (probably older ones), the mouse function comes back on when it wakes up, even if it had been turned off earlier. This is annoying if the "OK" key needs to produce Return/Enter. A work around is to get into the habit of pressing the mouse control key twice whenever the control is picked up. This wakes it up and turns the mouse back off. If it was already running, it toggles the mouse on and back off which does not hurt anything.