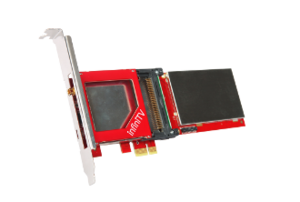 The Ceton InfiniTV 4 a CableCARD-enabled tuner card with four CableCARD 2.0 tuners and comes in both a USB 2.0 and PCIe (x1) formfactor. Unlike the Silicondust HDHomeRun Prime the InfiniTV tunes up to four cable channels with an M-type CableCARD obtained from a cable company, and does not require an Ethernet connection of its own. Due to differences between cable companies, the exact channels you are able to receive with MythTV can vary. The card is also capable of being used without a CableCARD to tune Clear QAM channels.

Ubuntu up to and including 12.10 does *not* have the driver installed in the kernel or in a debian package, so you'll have to follow the above.

The machine detects the ctn0 but does not assign an IP to the card. You need to create an ifcfg-ctn0 in the /etc/sysconfig/network-scripts folder with an IP on the same network range of the tuner card which is typically 192.168.200.1 for PCIe tuners and 192.168.180.1 for USB tuners. An example of the ifcfg-ctn0 file is below:

You should be able to now access the card's internals from your web browser, typically http://192.168.200.1 for PCIe InfiniTVs and http://192.168.180.1 for USB InfiniTVs. You'll need to get your CableCARD activated at this time. Give this a try before going on to the next paragraph.

After installing the card and inserting a CableCARD you will need to contact your cable company to Pair and Activate the card. To obtain the information they will ask you, go to the IP address for the card and select CableCARD from the horizontal menu at the top. This screen will show you the activation status of your card. If you look down the page, about half way you will see a heading labeled Card Applications. Next to that, there will be a link for the Host ID or Pairing Information screen (the exact wording will vary depending on your cable operator's configuration. clicking on this will open a window that shows the following information for your card and device,

When the CableCARD is paired with the InfiniTV, the Card Authorization on the CableCARD page of the InfiniTV's webpage will state Validated, validation message is received, authenticated, and the IDs match those in the current binding

Once the above is done, you should test output using mplayer as per the README's instructions that came with the driver. Using the web interface, select the first tuner. Go to 'one', then the 'tuner' tab. Hopefully you have channels in the drop-down: if not, double-check your CableCARD activation. Select a channel in the drop-down: I would pick one that might be in the clear to ensure you don't have encryption issues (say, channel 3, or 5, or 8 in the United States). Then click "Set Channel." It should reload the page and claim a good signal-to-noise ratio (some negative number that's higher than -7; mine was -17.4).

When a CableCARD is inserted, it provides a channel map and scanning for channels is not required.

Linux does not support the copy protection that may be assigned to channels by a cable operator. Channels which are Copy Freely (CCI 0x00) will be viewable under Linux. Channels that are flagged Copy Once (CCI 0x02), Copy No More (CCI 0x01) or Copy Never (CCI 0x03) will not be viewable under Linux. Some cable operators, such as Verizon FiOS and Comcast mark most channels Copy Freely. Others, such as Time Warner, mark most channels Copy Once. You should ask your cable company what CCI settings they set before purchasing a CableCARD tuner to understand which channels you will be able to view under Linux.