The goal of this page is to compare the options and make a choice for frontend hardware. Most of us have a combined frontend/backend system in the living room or a backend somewhere hidden. As we get more addicted to MythTV, the desire for additional frontends in other rooms in the house is increasing. This page compares frontends that either run MythTV natively or speak the myth protocol.

Another possibility is to use a UPnP client communicating with the backend's UPnP server.

An SD frontend shouldn't need a lot of hardware power. In fact, new video acceleration hardware (VDPAU or CrystalHD) can even allow you to use minimal frontend to play HD content. How cheap can you go and still play recordings from a backend?

How much pain and suffering required to get things set up and running? How much 'fiddling around'? Will Mythdora, knoppmyth or another all-inclusive distro 'just work'? If network booting or other approaches used to reduce costs, how hard are they to configure?

I'm cheap, but I also value my time. If somethings going to save me $100 but take 20 extra hours to figure out it's not worth it to me...

Is there any trade-off in video or sound quality?

Is the system power borderline? Are menus slow? This attribute is mainly aimed at MediaMVP, which loses points since kids, spouse, etc will need to learn another UI.

Other nice side-benefits of a particular approach or system.

Please specify the performance for each build below.

The first generation XBox, not the XBox360.

Given the cost of the XBox, it makes a pretty decent Standard-Def frontend. The CPU has enough power to perform all the usual MythTV bells and whistles (OSD, Time-stretch, haven't tested Picture-In-Picture) with MPEG-2 video (haven't tested those features with MPEG-4, but Linux can run MPEG-4 in MythVideo). The machine is quite stable, but depending on how you go about installing MythTV, your software might not (some prefab'd Myth disk images are slightly unstable). One useful side-benefit is that should you find MythVideo to be unsatisfactory for one reason or another, an alternative can be run as XBox homebrew (the most common is XBMC). For $129 (with the price sure to fall eventually, with the release of the XBox 360), the XBox gives you a machine capable of all the (standard definition) MythTV features, and a few extra features as well.

The machine is mostly quiet, the loudest part being the fan, which is easily overridden by either controlling the fan speed (0.9x and below delivers noticeable changes), by replacing it with a quieter fan (if you're prepared to void your warranty), or simply by putting something on (the fan is easily drown out by ANYTHING, and can usually only be heard when everything else is silent). While the XBox has been criticized as the largest game console known to man, it's only roughly the size of a VCR, and shouldn't be too outrageously large to install in a home media center. The DVD-ROM drive is quite functional for commercially pressed discs, but (depending on the brand of your DVD-ROM drive) is not compatible with most CD-Rs, and some brands of DVD±R(W)s, including Dual Layer media. The XBox is also phenomenally easy to set up. One cord for network, one for A/V, one for power. If the user feels it necessary, additional peripherals can be installed through the XBox's USB ports (though an adapter will be required).

I think I read that this includes softsqueeze for tunes. 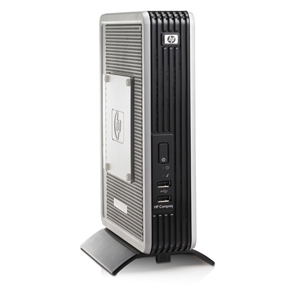 This box is available as the t5720 or the t5725. Hardware is identical. The t5720 ships with windows, the t5725 with a "Debian-based client". There are many CPU/Memory/Flash configurations. I've got the 1GHz/1gb/1gb version working without problems running a default Ubuntu 8.04 desktop installed to a 4GB USB stick. I paid $200 on eBay without the PCI expansion slot. I use the USB Keyspan Vista RF remote so the frontend can be hidden and does not require line of sight for remote control. My next steps include moving the log files to RAM [3] to preserve my solid state storage. The PCI expansion slot will accept a half-length, full-height PCI video card. I found a fanless PCI nvidia geforce 6200 card w/ s-video out for about $35.00. It handles mythtv easily and I can enable Compiz to get the nifty eye-candy. This is a stable frontend which I use in my living room daily. I've tried xboxes, macs and clunker PCs as frontends but the t5720 / t5725 has been the easiest to setup, quietest and most stable solution I've found.

Links off to specific system entries in the PVR Hardware Database.