This article is to provide information on how to integrate FM radio into MythTV. This is based on Integrate Sirius but I wanted to post details on how to make it work for FM radio too.

I only have a Hauppage PVR-150 card. I cannot speak to other setups, but please feel free to edit this page to include information for others.

Note: The method used here will only work on a mythbox that has an FM Radio card (such as a PVR-150) installed locally. It does not matter if it is only a frontend box or a backend+frontend box, but the hardware must be in the box you are setting this up on.

Note: this is NOT a plug-in and is basically a hack but when completed it looks just like a plug-in.

What this article is...

This article IS about:

What this article is not...

This article IS NOT:

Only a working installation of MythTV is required with a working PVR-150. Also you must be able to receive and play an FM signal on your PVR-150. To verify this do the following:

This will scan the FM band for channels. Next do the following:

if this does not work, please see the [web page] for detail on how to make this work and return here when you have this working.

OK, now we are going to write a couple of über-simple shell scripts that we will use to make MythTV work with your FM tuner. You will notice that these are simple, novice scripts that are pretty crude. This hasn't been called it a "hack" for nothing.

We need to create a couple of files so find a nice place you can create and execute them from. Personally, I put them in /usr/bin

Now you will want to make them both executable:

Now, pull up a command window and run one of the commands we just "made"

Do you hear the stataion without having to enter a single thing in the command window? That's good, now use this to kill the stream

The following combined tune/kill script uses a more general approach that works for v4l-based radio devices. The basic idea here is that we first configure the tuner for the station we want, then capture from the radio device and forward to the output device. This method requires that you have fmtools and sox installed. For this to work you must also have alsa-oss support working. This can also be done with pure alsa (look at the sox manpage) but using oss was easier for me to get working. Save the following script to /usr/local/bin/mythfm then replace calls to "mythfm_kill" in the menus created below with "mythfm kill". It should be fairly obvious how to add stations to this script and add them to the menus.

Setting up the MythTV GUI

At this point, you should be able to listen to (and kill) streams from the command line with no user intervention... that's 1/2 the battle. Now, we are going to hack a couple of buttons onto the default menu theme.

Note: If you are currently running MythTV version 0.20 or higher chances are that you're using the default menu theme. No, not the actual MythTV theme, just the menu theme. To check out which one you're using do this in Myth: Utilities / Setup (or Setup) -> Setup -> Appearance -> and at the bottom of the first options page you will see the menu themes selection box, we will be hacking into "Default" so make sure it's set to that one. If you use classic or DVR you can change some of the commands below so that your work is being done on that particular theme (just add /themes/classic or /themes/DVR respectively to the "cd" commands below).

I use the v option because it's an easy way to verify (VIA verbose) what files were put into the tar ball.

I'm only going to show you the 2 required changes to get this hack to work.

I added the following to my mainmenu.xml file.

Then, I created the fmmenu.xml file (be sure to add all of the stations you want access to):

Warning: The following code is wrong. Instead of using EXEC, the <action> should use EXECTV, which will pass as an argument to the script the video device that should be used. Then, the script mythfm should be modified to use the argument to detect which card should be used and tune the radio on that card. By using EXECTV, the <action> tells MythTV that the tuner it provides is not available for any recordings.

OK, now the tag definitions for the above xml file

You have to wrap mythfm around the stream because when MythTV runs the EXEC it waits for a response before it releases the button. mythfm simply kicks off ivtv-radio and tells MythTV that it's finished executing. You are going to have to modify this file if you want to add another language tag or if you want to add additional channels, it should be simple to see what needs done to make it work just be sure that you create the soft links before you try to add a button or it won't play the stream. 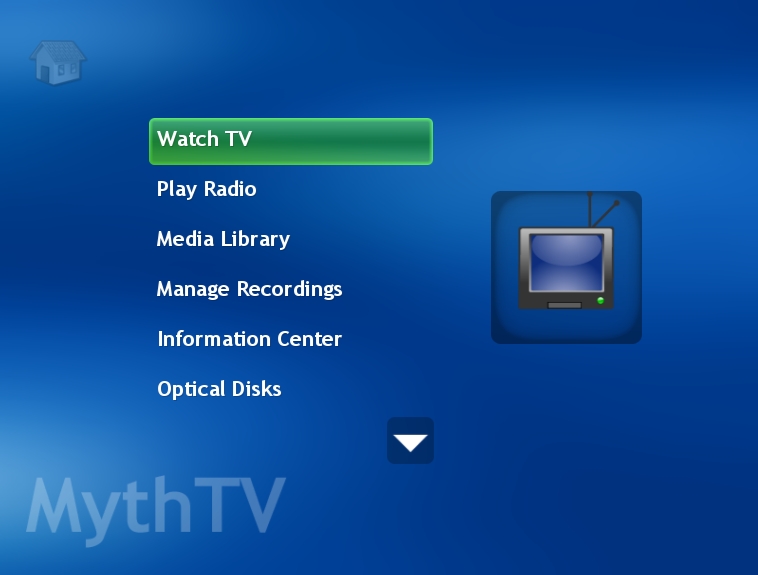 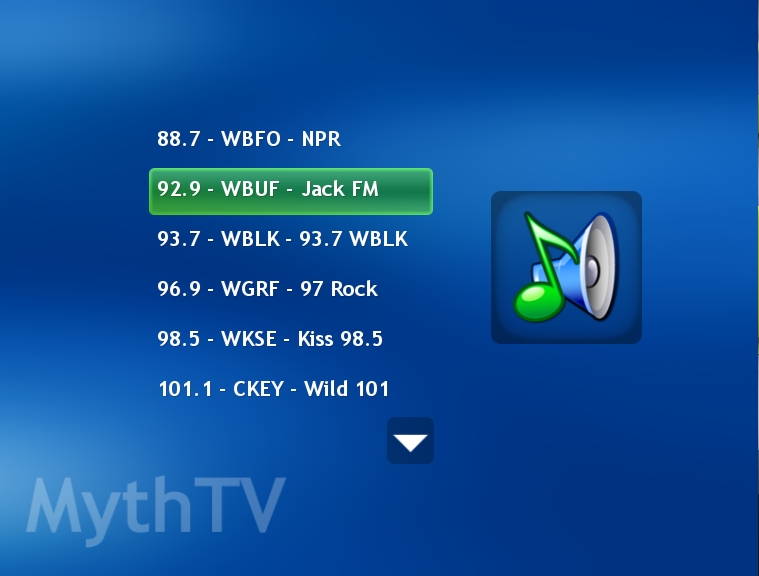 There are several issues with the method described above, like

Under Input Connections, set the Composite source (of the tuner card with the radio) to radio. Set all External Channel Commands for that tuner to "/usr/local/sbin/mythtv-fm.sh".

And here is the script:

You will need to change /dev/radio0 and /dev/video0 to your radio and video devices. To disable logging, uncomment the #log line.

Basically what is happening now is that all your channel change requests for that tuner is handled by this script. It first kills any ivtv-radio processes. It then checks the frequency and if the frequency is too high for FM, it is assumed to be TV and the ivtv-tune is called to change the TV channel. If the frequency is too low, it is just ignored.

This is based on http://readlist.com/lists/mythtv.org/mythtv-users/3/15176.html.

Channel changing with a remote through lirc

I tried all the above, but got frustrated that I had all the time to turn on the TV set to play the radio. I simply wanted to turn on/off radio playing, change channels and volume with a remote. After a lot of thinking and trying I came up with the following set of scripts using ircat to receive the lirc commands which in turn pipes them to a fifo file. The main script consists of a loop that listens to this pipe and performs actions on the base of those received commands. Commands can also be 'echoed' in the pipe through other means. So can you quit the script with 'echo quit > /tmp/mythtv-fiforadio'. Also the commands are not restricted to playing and controlling the radio. It is mostly compatible with and has partially integrated the above solutions. Ones I got started I got carried away. It contains now a lot of extras, like logging, sanity checks etc. The lirc commands you want to sent to the script are defined in ~/.lircrc or where you have placed it. I myself have simlinked it to ~/lircrc, ~/.mythtv/.lircrc and ~/.mythtv/lircrc. So it will be found.

prog is the same string as defined in the 'LircProgID' variable. its what ircat listens to.

config is the string send to the fifo pipe and should exist in the case/esac statement in remoteRadio.sh.

Be sure not to use the same buttons you are using in MythTV. They probably will be received by both, creating unexpected results. I use a separate remote for the radio.

Most of the rest is explained in the scripts themselves. If you have questions put them on the mythtv-users list. I'll probably see them.

If anybody can put an adapted runscript for other distributions, that would be nice

8 october 2014: Added support for non IVTV cards. ivtv-radio can tune and play them, but the audio setup is different. Mainly for cards cable connected to an audio-card. Also added comments to radioFunctions.conf and corrected some errors.

16 october 2014: Added a check whether the TV-tuner is known and in use by MythTV. If so the radio refuses to start. If it is unknown the TV refuses to tune.

It exists out of the following files that should by default be placed in ~/.scripts:

Placed in the the run script directory (on gentoo /etc/init.d and /etc/conf.d)

Further are the following files created as needed: in ~/.scripts:

This is the main script 'remoteRadio.sh' with explanation in between:

This is a small python script to check the tv-tuner status run it with --help to see its options:

The Gentoo style runscript 'radiocontrol' to be placed in /etc/init.d

The Gentoo style configfile 'radiocontrol' to be placed in /etc/conf.d