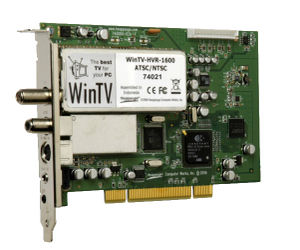 The HVR-1600 is the latest capture card from Hauppauge (pronounced /hɔphɔg/ like the Hamlet on Long Island, New York where the company just so happens to be from) Computer Works. The design is made entirely of Conexant chips. The Conexant CX23418 is the TV broadcast decoder, MPEG2 encoder, and host bus interface chip. The CX23418 is the next generation of the CX23416 that was used on the very well supported PVR-150 and PVR-500 series cards, it combines the hardware encoding engine of the CX23416 with a CX25843 broadcast decoder/digitizer core on one chip. The only other chip worth mentioning is the new Conexent CX24227 ATSC demodulator used for digital TV reception. The retail version of the card supports and comes with an IR Blaster and Receiver, as well as a Remote. The over-the-air tuner supports all ATSC formats, up to the high definition 1080i format. Some of the HVR-1600's (product code 74021 and 74041 found on the tuner label) also support Clear QAM, which is most likely the stuff your cable company uses for your local HD channels. Again the analog tuner supports encoding NTSC into MPEG-2 at 720x480 resolution with a data rate of up to 12Mbits/sec.