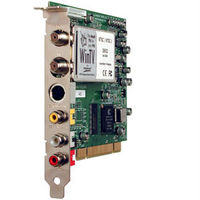 The Newest version of HAUPPAUGE PVR-150 popular Video capture card. Derived from the PVR-250, but with cheaper design (Hauppauge's own statement). They are likely easier to find in a local store than the PVR-250. (A local fry's guy said he hadn't seen the PVR-250 on shelves in a while).

As with the PVR-250, the PVR-150 card has gone through multiple revisions. The card called a PVR-150 MCE (pictured) does not contain a connection for a remote receiver, but it adds support for FM radio tuner and composite video. Older revisions of the card, typically called PVR-150, were sold with a remote and remote receiver, but lack the FM tuner and composite video inputs.

Hauppauge no longer ships any of the analog only (PVR) cards due to pressure from FCC.