Difference between revisions of "Hauppauge PVR-350"

Warning: This page should be migrated to the LinuxTV wiki

Warning: The Hauppauge PVR-350 mpeg2 hardware decoder (playback) is no longer supported since version 0.23 ( see http://svn.mythtv.org/trac/changeset/22845 ). With MythTV 0.23 and later, the ivtv Xorg/Xv driver is required for TV output using this card. 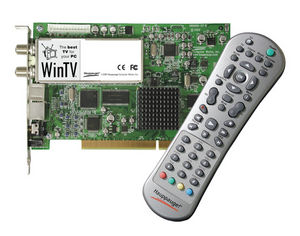 The Hauppauge PVR-350 is a video capture card manufactured by Hauppauge Computer Works, Inc. It is supported by MythTV using the ivtv driver.

Hauppauge no longer ships any of the analog only (PVR) cards due to pressure from FCC.

What it Does & Doesn't Do

Well Suited for: a single-card solution for input/ouput of video and audio to a standard television, running only MythTV and recordings. Also well-suited for underpowered systems, since the onboard mpeg encoding and decoding mean your CPU has very little to do. As a single data point, consider that the utilization on 750 Mhz PIII is only 20% while watching live tv.

How do you send TV-Out audio to the sound card?

Take the L/R audio out and feed it into a L/R female RCA to 1/8 male adapter. Plug this into the line input of your sound card and make sure mute is off.

Q: How do you resize the MythTV UI and playback overlay to fit the TV screen when displaying X on the PVR-350 video output?

A: This is one approach, based on a MythTV install created using Jarod's guide [1]. It does not currently resolve the more general problem of the whole X session fitting the TV screen. (See also A2 below)

A2: This is another solution used to configure the port to operate. There are some test you should conduct first to make sure the card is talking to the TV correctly. If that checks out, proceed to follow that HOWTO. However, the section detailing fbdev will probably cause X-windows to crash, so don't follow that part of the HOWTO.

Adding this to /etc/modules may interrupt ivtv from properly loading firmware. So make sure this boot script executes AFTER ivtv has loaded.

NOTE: fbdev does NOT work!!! I found many sites a la Google that had all the correct X-windows settings, but they were about 2 years old, and they caused bad errors. The following settings should work pretty well:

You can increase the IVTV buffers by adding the following line to /etc/mythtv/modules/ivtv:

those are the maximum amounts for all those buffers.

UPDATED ON 1/30/08: I was trying to add more buffer space on Ubuntu Feisty Fawn and ivtv 0.10.1 but the above parameters weren't working. After being told to run "modinfo ivtv", I was able to find out that the parameters (options) are now different. This is the line that I added to my /etc/modprobe.conf file options ivtv enc_yuv_buffers=32 enc_mpg_buffers=16 enc_vbi_buffers=16 enc_pcm_buffers=16. BE CAREFUL to note the units for each buffer sizing... My modinfo ivtv states that enc_pcm_buffers is in kB with a default of 320 so 16, as mentioned above, is very low.

here is another sample

If it works, instead of seeing:

If you can configure the PVR-350 from mythtv-setup but you can't seem to get recordings to schedule (or watch live TV), you may not have the proper drivers loaded. See Troubleshooting:mythbackend:_Problem_with_capture_cards:_Card_1failed_init

Another possibility that seems to be causing problems is that by (at least) 2011, many of these cards had two electrolytic capacitors, 680 uF, 10v units on the right-hand edge of the card, failing. The failure is visible: brown leaking electrolyte and visible bulging on the top of the can. If you have one of these cards, you should replace those capacitors.