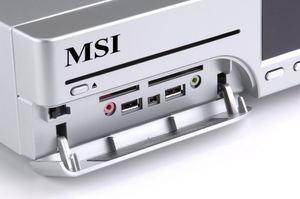 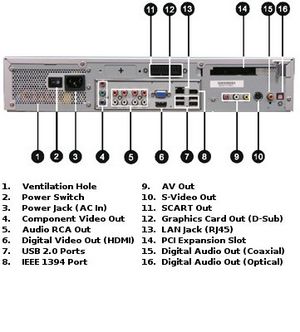 The suction-type optical drive provides an extremely easy and convenient way of inserting or ejecting the disk. [May require slight adjusting of mounting height for smooth operation.]

The fancy LED is a status-displaying panel that easily shows the status details of the DVD, music, pictures, TV programs and messages. The VFD is the Futaba DM-140gink.

It comes with full set of connecting ports including USB and IEEE 1394 ports, as well as a DV output, S-video port, and multi-channel audio output, which support the connection to most of the consumer electronics such as TVs and stereo sets. See image at right for details.

Full specs of the barebone on www.msi.com

The package includes a CPU cooler, the DVD player and a MCE remote type 2

A key component of the box is the Futaba DM-140gink PCB. It's a combined USB based device with the following functionality:

See the Futaba page for instructions on enabling the hardware listed above.

This unit is still shipping (as of 12/7/2008) with a beta version of the BIOS (as evidenced by a message that appears on power-up that says "not suitable for production"). Update to the latest BIOS version from MSI's website first thing before you do anything else.

The unit does not come with a floppy drive, and the only way to flash the BIOS using MSI's flash program is from DOS. Unless you have a bootable DOS CD-ROM laying around somewhere (doesn't everyone?) you'll need to create one, or even better, create a "DOS floppy" on a USB flashdrive. Neither of these options is simple, and I wasted about four hours figuring out how to do this on my own, so now you don't have to!

It says it is for HP USB drives, but I used it with a non-HP drive, no problem. When you run the tool, be sure to choose the option to simulate a floppy. It will prompt you for a floppy image to put on the drive, and you can use the one I made which includes version 1.63 of the BIOS (the most current as of this writing).

Now just pop your USB drive in one of the available ports on your MSI Media Live, power up, and run the flash.bat file included in AMIBIOS folder on drive and follow the on-screen directions.

NOTE: If a newer version of the BIOS becomes available, you can easily replace the version in this image by connecting your flash drive to your PC and simply copying the new files from MSI onto your "boot floppy".

TV Mode support in the Bios

Select the TV standard which is used as the video signal format of your TV if you have connected a TV to the system. Setting this may force the output to S-Video, which could cause loss of colour if you use a composite connection. Available setting options are:

To get the HDMI Audio working I did this

(1) Upgraded the bios to the latest version (1.61 - not checked with earlier versions but they may work)

(2) Set Enabled 8ch Audio to DISABLED in the BIOS.

(3) Then in Myth set the audio output as ALSA:spdif (under Utilities/Setup -> General

MythTV support is good as far as tested

Things to do if you are going to use this set-up:

- Get the latest from the mythTV NVidia Proprietary Driver page

Note about the built-in IR receiver:

Reports[1] indicate that the built-in IR receiver appears to have limited range/response. At distances of 6-8ft, even though the receiver's red LED indicates that it is receiving the IR pulse, the transmitted code is often 'heard' by lircd after a few second delay. Increasing the distance between the transmitter and receiver further, or transmitting at angles over 15-20 degrees away from center-axis in any direction causes the code not to be heard at all (though red LED confirms receipt).

Using the ACPI wakeup has been tested on Ubuntu 7.10 as far as to manually set a time and have the ACPI alarm wake the machine up from a powered down state. This was despite the fact that checking the alarm indicated the year as "0008".

The Media Live is designed to operate with just two quiet fans, keeping the overall level of noise down. However the CPU cooler provided is designed to suck cold air in through the top of the case, and then exhaust the heated air into the case. For lower power processors, this may not be the most effective cooling. The fan in the cooler can be flipped through 180degrees in order to exhaust the hot air through the top of the case, rather than into the case. To do so, carefully unclip the large black plastic surround from around the top of the radiator assembly and pull off. This will allow the fan and its capture assembly to slide out sideways. Remove the fan capture assembly from the fan, flip the fan through 180 degrees and realign the capture assembly. Putting it back together is simply a case of re-inserting the fan assembly under the radiator and then clipping the black plastic housing back on again.

Dependant on the CPU, this can result in lower internal temperatures, which can be useful, given how hot some tuners run.

The motherboard provided has a 1x PCI express socket, but this is masked by the PCI riser. It MAY be possible to replace the PCI riser with a PCI express riser and thus use the PCI express functionality. This hasn't been tested yet (to my knowledge).

I (Moosylog) am planning on using this case to replace my Xbox frontend. This list of parts might help others. Newegg has been within a couple of dollars on all parts, and I trust them and would rather buy everything from one place - hence all the newegg links. With four Gigs of RAM, I will likely load the whole OS into RAM and just use the USB drive for booting. I'm also considering just PXE booting the whole thing and not having any disk at all.