The current Perl-based build processes are great for producing a self-contained Mac frontend. But if you want to run the backend on OS X, then having the essential programs packaged deep in an application bundle is less than ideal. The MacPorts distribution aims to make it much easier to install the backend and run it in a production mode:

The documentation on this page will focus on running the Myth master backend (version 0.27), including the MySQL database server, on an OS X machine. Using the MacPorts install it is also possible to run the machine as a slave backend or job queue server. It may be possible to run the machine as a Myth media server; this configurations hasn't been tested. If you do, please share the results by updating these pages! 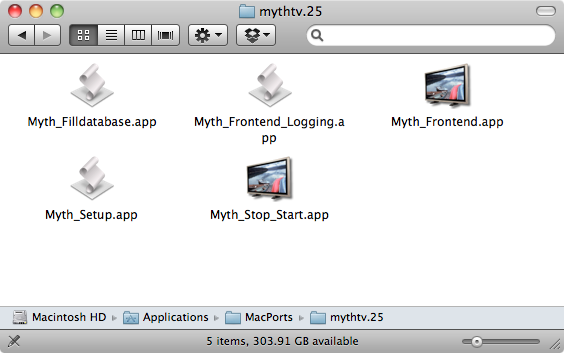 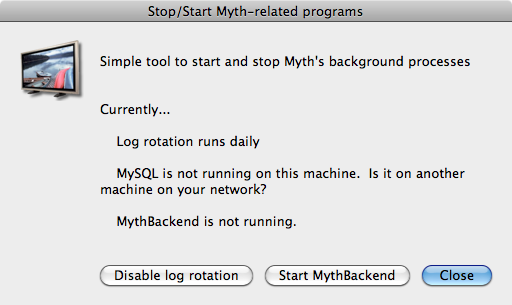 Myth generates a LOT of log files. We use logrotate to keep the most important ones (mythbackend, mythfrontend, mythtv-setup, etc) for two months and to delete those created by some of Myth's 'utility' programs (mythpreviewgen, mythcommflag, mythfilldatabase, mythmetadatalookup, etc).

This issue was fixed with the October 24, 2014 release of the installer and all users are strongly encouraged to use the latest available version.

Plugins are not installed.

We'll need to run some commands from Terminal.app (Applications > Utilities folder). It will make life simpler if PATH includes appropriate directories for the software you just installed. Check you path by entering:

If you built Myth yourself, your path should include "/opt/local/bin:/opt/local/sbin" and some other directories. If you downloaded the MythTV installer, your PATH needs to include "/opt/dvr/bin:/opt/dvr/sbin" but doesn't! To fix that, we'll create or add to the hidden '.bash_profile' account in your Home directory:

You must quit and restart Terminal for the change to take effect. After that, use the 'echo $PATH' command to check that the change has taken effect.

Warning: This section gives many users problems. Please copy/paste each of the commands carefully and in the order given. In general, you will only get ouput back if there is an error. Please check carefully that each command has succeeded.

Add '-p' to the third command if you've followed the (very reasonable) instructions to protect the root account on your MySQL database with a password.

After this command, look in Activity Monitor to see that the "mysqld" is running. We can't go further until it is!

The above step simply verifies that you can connect to the database as the 'mythtv' user (default password is 'mythtv'). Type 'exit;' and press return to exit back to the Terminal.

Note, on MySQL on my system, the user "mythtv" has the password "mythtv" but the user "root" has no password. (Don't tell anyone, OK? I don't want my database hacked!  ;) Terminal may not be able to find the command unless you enter the full path. The command that worked for me was:

This final step loads time zone information into MySQL. (Again, add '-p', if necessary.) You may get a series of warning messages. These are no cause for alarm unless your specific time zone is not loaded.

If you switch to Activity Monitor (via Command-Tab), you'll see MySQL, the backend and the fronted all running: 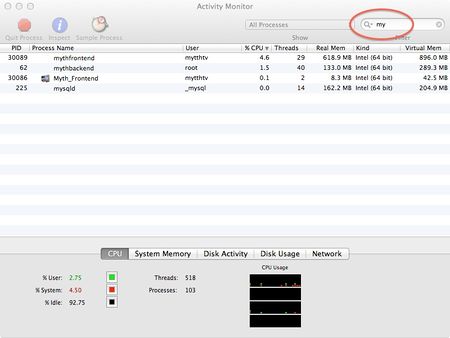 If you installed Myth from the all-in-one installer before October 17, 2014, there are some steps you should take before upgrading to the new version (0.27.4, released on SourceForge on October 19, 2014). Despite the version number change (0.27.1 to 0.27.4) there are actually several major changes in supporting software. In particular, we're now using MariaDB version 5.5 in place of MySQL version 5.1. It is not hard to transfer all your recording rules, history, etc from the old database to the new one, but you need to follow the precise order shown in the following steps.

A file should be created on your Desktop, named with the pattern "mythconverg-1317-2014mmddnnnnnn.sql.gz". As long as the size is non-zero, you have a successful backup.

Quit and restart the Terminal for the new $PATH to take effect. You can verify that the $PATH is correct if you get the same output show below: