MythZoneMinder is a plugin to interface to some of the features of ZoneMinder. You can use it to view a status window similar to the console window in ZM where you can check the ZM servers status as well as enable/disable a camera, turn on notifications and alter the camera recording function (i.e. record only on motion detection etc). There are screens to view live camera shots showing 1, 2, 4, 6 or 8 cameras and replay recorded events which can be filtered by camera and date. There is also a notification pop-up that can be turned on for each camera that pops up a mini view of a camera whenever motion has been detected. Other features may be added at a later time if there is sufficient interest.

You must already have a working ZoneMinder installation accessible somewhere on your network. The plugin has been tested with versions from 1.22.2 up to 1.30.0

The plugin doesn't require any additional dependencies to compile. As with all the plugins you should have compiled and installed MythTV before trying to compile it.

added as a parameter when running the configure script.

Then compile and install the plugins in the normal way.

mythzmserver is a small daemon that should be run on same machine that ZoneMinder is running on. It is a server that responds to request for information like ZMs server status, live frame data, event frames etc from mythfrontends running the MythZoneMinder plugin.

The server will be compiled as part of the normal mythplugins compilation and if the server machine is running similar versions of the required libraries then you can simply copy the mythzmserver executable over to the server machine.

If not then you should copy the mythzmserver directory over to the server machine and compile the source there. It doesn't require Myth or QT to be installed. You can use the Makefile.standalone to do the compilation like this:-

then simply copy the resulting mythzmserver to a suitable location.

You should usually start mythzmserver as a service at boot time. It must be started after the ZoneMinder server has been started. One way to do this is to modify the ZM startup script to also start/stop mythzmserver. The server should be run as either root or as the same user that ZM uses. By default the server will listen on port 6548 and will read the ZM config from /etc/zm.conf if you need to change any of these you can add a parameter to change them. See the README in the mythzmserver source directory for a list of available parameters.

The first thing you should do is go to MythZoneMinder's settings page and make sure the settings there are correct for your system. Currently the only settings are for the IP address and port that the plugin should use to connect to the mythzmserver.

The various screens are described below 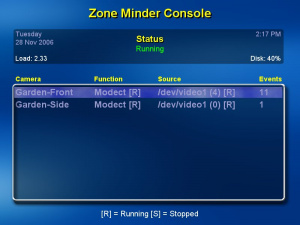 The console screen shows you if the main ZM daemon is running, the current date/time, what the CPU load is and what percentage of the drive used to store events has been used. Below that is a list of monitors/cameras, their current status and a count of how many events are stored for each monitor. 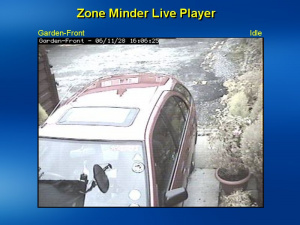 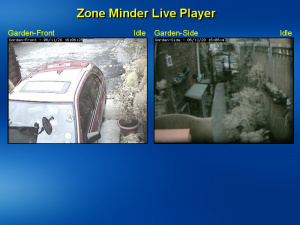 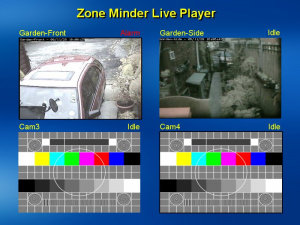 The live screen shows live views from any available monitor. Currently there are views to show 1, 2, 4, 6 or 8 cameras/monitors simultaneously. Above each monitor view is the camera name and the current status e.g. idle, alert or alarm. 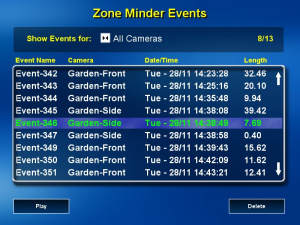 The event screen shows a list of all stored events. You can filter the list to show events from just one monitor or all monitors and also by date. Events can be played of deleted as required. 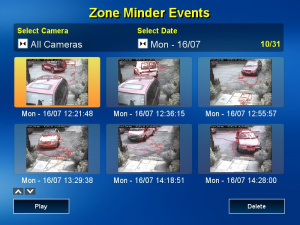 The grid view shows the events list in an image grid with each image being an analysis image showing any movement detected outlined in red. You can switch the grid view to show 1, 2 or 6 images in the grid by pressing the 1,2 or 6 number keys. 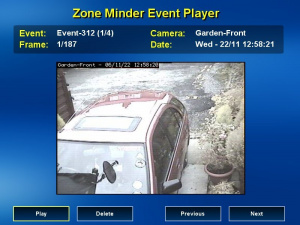 How to overcome some common issues:

1. mythzmserver fails to start with a "This version of ZM is to old you need 1.24.0 or later" error message.
- Newer versions of ZoneMinder no longer put the ZM_VERSION in the zm.conf configuration file which mythzmserver uses to configure itself.

Simply add the line ZM_VERSION=1.30.0 to the config file which you can find at /etc/zm.conf or sometimes /etc/zm/zm.conf.

2. MythFrontend crashes after you try to enter the live view screen.--Tgutwin 21
39, 4 March 2007 (UTC)
- If you have just changed any of your ZM monitor sources (/dev/video0 to /dev/video3 for example) you will need to restart the mythzmserver. Find the mythzmserver process, kill it, and restart it.
- Try turning off OpenGL playback in the settings panel as this can cause the X server to crash.

Outdated: The following may be outdated and not relevant for current MythTV/ZoneMinder installations

3. Mythtv can't find the zm installation. Error messages show up in the myth logs(or console) when you try to access the MythZoneMinder menu items.--Tgutwin 21
39, 4 March 2007 (UTC)
This might happen if the MythTV install was not in /usr/local and when ZM was installed in /usr/local. You need to add the ZM_PATH_BIN variable into the /etc/zm.conf

Outdated: The following may be outdated and not relevant for current MythTV/ZoneMinder installations

Remove the need for mythzmserver and use the new ZoneMinder API to access the ZM server directly.