Difference between revisions of "Sony XL1B2" 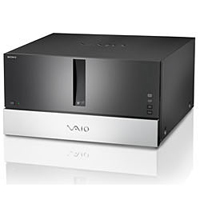 The Sony XL1B2 is a Firewire 200-DVD changer with a double-layer burner which is usable in both Linux and MythTV.

It is possible to use this unit with Linux and MythTv.

To get this device working you will need to ensure that ieee1394, sbp2, scsi changer and scsi cd rom/dvd support are enabled in your Kernel (later kernels have re-written firewire support with different but similar modules / kernel options) . If all is well then the unit will appear as 2 scsi devices 1 changer device and 1 scsi cdrom /dvd device e.g. /dev/sg2 and /dev/sr0. It is also possible to create a udev rule to give the changer a suitable symlink, the changer is a type8 sg device.

The mtx command is used to control the changer, MythTv and other application can use this command to change discs. You need an up to date version of mtx, when working correctly the device will show something like the following.

Although the nobarcode option is not required it speeds up the status command considerably.

The following fuse file systems allow both local and remote dvd playback and are also compatible with MythVideo and the MythTV Internal player.

If you want to use the changer with mythtv and offlinefs the following steps need to be completed.

You may need to adjust scripts to your environment e.g. /dev/sr0 and some of the paths may need adjustment. Once completed you should be able to continue setup using MythVideo as per regular video files.

If you had more than 1 changer I would assume that it would be a good idea to identify them somehow so that they get a consistent numbering scheme.

You need to make sure that the fuse module is available for you kernel and that you have built the userspace libraries.

Boost libraries and Berkeley DB (probably already installed under gentoo) also need to be installed. The README says that the Extended attributes library is also required as are GNU C++ tools, gentoo ships with these but you may need to install the relevant package under other distributions.

Make and install it

You may require the [ -o dbroot=<...> ] option to tell the system where to create the offlinefs database file.

You may require the [ -o dbroot=<...> ] option to tell the system where to find the offlinefs database file.

This uses the -b option to specify the database root.

This uses the -b option to specify the database root.

Sample from /etc/fstab to mount offlinefs

You can export this using remotefs and the system will work transparently, when a file is accessed the corresponding disc will be loaded automatically and dvdreadfs will provide access. It is also possible to setup a dummy folder to unload the changer and also add static files into the offlinefs file system such as folder.jpg etc. You may require the [ -o dbroot=<...> ] option to tell the system where to find the offlinefs database file.

It is provided with packages for i386 Debian-based systems, i386 Redhat-based systems, various OpenWrt-based systems (server only) and there are also Gentoo-ebuilds available. See downloads section Homepage: http://remotefs.sourceforge.net

remotefs has a similar setup to nfs.

Here is a sample of my /etc/rfs-exports on the backend.

Here is a sample of the line from my autofs map file at the frontend.

Sample to connect to server with rfs

You need to make sure that the fuse module is available for you kernel and that you have built the userspace libraries.

Save the patch above as 0001-Remove-read_ahead-caching.patch in the same folder and run

Save the patch above as 0002-Add-.volume_id-static-file-to-store-ISO-volume-name.patch in the same folder and run

The finally run 'make' and cp dvdreadfs to /usr/local/bin

It may also be useful to use the regionset utility to set the region code of the changer drive if you are not in region 1 (current default).

It is possible as an alternative to modifying mythtv to use scripts to load / unload the changer in conjunction with offlinefs. The following scripts are designed to work together to implement a working offlinefs system

OfflineFS allows you to use MythVideo to access your discs and enter meta data / lookup IMDB etc. Just mount it under your movies folder where MythVideo looks for video files, I assume it is also compatible with storage groups.

Another alternative approach may be something like the following

This approach should also work with a standard mythtv release. You should be able to enter meta data against your stub files. The scripts below can help to build something like this.

Designed to work with offlinefs and /var/state/mtx-slot cache file and the mythdvdchangerumount.sh and mythdvdchangermount.sh scripts. Pass the slot number required as the 1st parameter.

Mount the changer drive using dvdreadfs in /mnt/dvd and waits till the directory structure is accessible before returning.

This is designed to work with older versions of the Load/Unload scripts so some modification may be required. The main difference will probably be due to the fact the new scripts will attempt to mount the DVD with dvdreadfs which could cause a problem with lsdvd used below. If the mount command is commented out it should work OK.

Assuming your changer is physically attached to your frontend machine, this perl script will take inventory of the changer and write stub files that you can use to import into MythVideo and change to the correct disc as easy as choosing a video from the menu.

A couple of things to note:

If all goes well, you now have a directory filled with .stub files that represent each disc in your changer. Now go into MythVideo Settings and add a new filetype called "stub". The player command should be set to "sh" so MyhVideo knows to run it as a shell script. Then go into the MythVideo manager and scan for updates. Now you can add metadata to each file using your favorite lookup script (tmdb, etc.)

Now when you select a video from the list, the .stub file is executed which displays a loading message and issues the script to load the correct DVD and plays it with mplayer.

This is based on the script above to import your DVDs into the offlinefs folder system. The folder structure provided by mythdvdchangermount.sh will be used (which uses /mnt/dvd as the mount point) so I would recommend using the dvdreadfs with VIDEO_TS modification for this. It is designed to work with the modified offimport_cd.sh script below.

Just a sample script to use with the above inventory script in case you want to retrieve some more data. I'm no perl expert otherwise this could obviously be done in perl easily as well.

This is a modified version of the import script that ships with offlinefs. Save this over the existing offimport_cd.sh script (/usr/local/bin/offimport_cd.sh)

These 2 misc scripts help determine if import has been successful

To show folders with no sub folders issue

To count all folders with 1 sub folder issue

This should be the same as the number of DVD video discs that you have imported.

In addition to playing the disks off the drive, it is possible to use the unit as a "Batch Ripper." Go to this web site and click the "XL1B Media Download" link at the top. Also, install the prerequisite packages (Ubuntu Example):

You will also need to install a copy of HandBrake if you wish to rip and compress at the same time.

Unzip the XL1B Media ZIP somewhere and change to that directory. Create a new file called "XL1B-DVD-RipCompress.py" and insert the following:

Edit the variables at the top to suit your destination. The drive devices *should* autodetect, but you can hard code these if necessary.

Save the file, and make it executable by running the following command on it:

You can now run the script and the ripping process should begin.