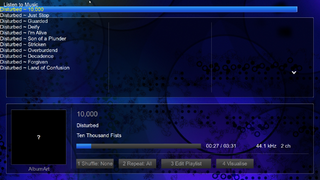 Firstly, this is a fantastic theme. Many, many thanks to the developer!

I have contacted the Theme developer regarding these bugs:-

HOWEVER, if you go the long way round, and choose > Menu > Sort > Sort By Title... it does NOT crash!

To fix the parental level in the video detail view (in version 1.4), edit the file:-

This patch for Blue Abstract theme version 1.5. It displays the configured user job name when editing Post-Processing rules for a schedule, rather than always showing "Run User Job #1" etc.

This patch is for Blue Abstract theme version 1.5. MythTV does not have a Genre field, but it does have a Genres field. This is because most movies fit in to multiple genres. Because of this, the genre list would not fit in the current position. I have therefore moved the Genre list under Cast and moved all the other fields down and the Parental Level has been moved to the right.

This patch is for Blue Abstract theme version 1.5. It adds the classification rating (such as U PG 12 etc) just below the user rating in the title summary.

This patch is for Blue Abstract theme version 1.5. It fixes a few text overflow issues on the OSD:-