When you select Watch TV from the front page, MythTV will automatically go to the default channel when you setup the mythbackend. You can also have it go directly to to programme guide.

While watching Live TV you can change channels with

. There is a pause of several seconds while MythTV buffers the new channel. People often find this pause disconcerting as they are typically coming from a normal TV where they are used to "Channel Surfing", though it's fairly common on digital cable TV service, as well. The way to overcome this is to put MythTV into Browse Mode, and this will become the default as of 0.19 for precisely this reason.

Browse Mode is enabled under

check the box "Always use browse mode when changing channels in LiveTV".

to browse the program information on the next/previous program with the OSD. Then when you see the program you want, press

and MythTV will jump to that channel. While in Browse mode you can also use

to see what shows are coming up next, by scrolling the program guide earlier and later in time.

to increase/decrease the volume.

to toggle the audio mute 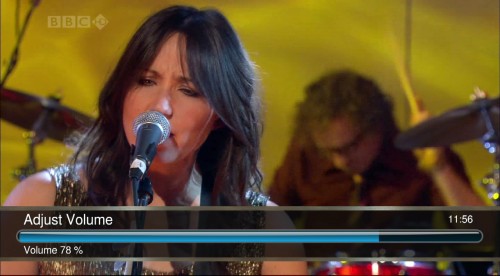 You can step through the different screen aspect ratios with the

MythTV offers some of the most sought after features of modern Media Centres.

Pausing live TV is great when the phone rings during a show or your little ones need a comfort break during a movie.

on your remote the picture will freeze, and MythTV will start to buffer Live TV to the hard drive. The OSD will appear showing seconds behind realtime TV and (in version .18) how much live TV has been buffered as a percentage of total buffer space.

In .18, if you changed channels or exit from watching Live TV then any buffered TV will be lost. 0.19 changes this by treating live TV as a recording and saving it in your media list. The live tv recording is set to auto expire when the hard drive nears being full. 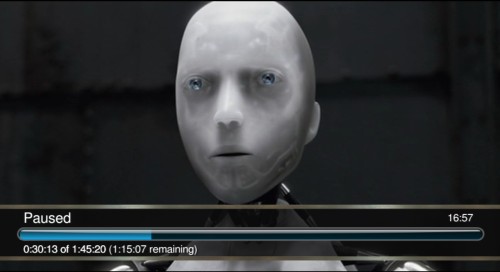 While the picture stream is paused:

to move forwards / backwards by 1 frame

a second time to unpause live tv, you will now be watching 'behind' live TV. This is sometimes referred to as Chase TV Playback for obvious reasons.

With Chase TV Playback the system can be recording live tv while you are watching the same program behind realtime. It is somtimes referred to as Timeshifting TV.

to move forwards/backwards in the stream (default is 5 seconds)

to jump forward/backwards by the configured number of minutes (default is 10). This is great to skip quickly over commercials

If you are coming to MythTV from using a Video Recorder, you might want to enable the "sticky" keys option. This keeps the fast forward or rewind on even after you release the key. Subsequent presses of

will increase the speed of the rewind or playback. When you reach the point you want to watch, press

At the 0.17 release of MythTV the concept of timestretch playback was introduced. Though, it's really 'time-compression'. This allows the user to adjust the playback speed slightly, but keeps the audio at the same pitch. If you're recording a lot of shows, timestretch lets you get through them faster. So now you can watch a 1 hour show in 40 mins without feeling like you are listening to Alvin and the Chipmunks. You can use this feature to play the TV Stream in slow motion, nice for instant reviews of sports events.

to toggle the Time Stretch playback. 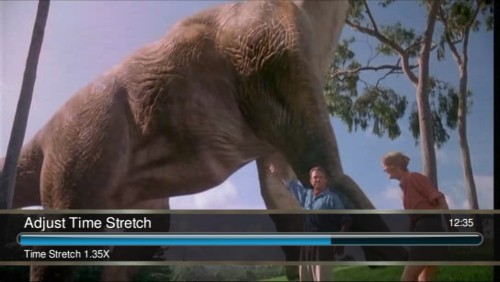 to set the Time Stretch speed.

The Electronic Program Guide will allow you to get more detailed information on what is being broadcast currently as well as scheduled programs that are coming up.

Since Mythtv 0.20 you can go directly to the Program Guide, by pressing

and the OSD will show information on what you are currently watching. The OSD will stay up for a default of 3 seconds and then fade out. You can set the duration in 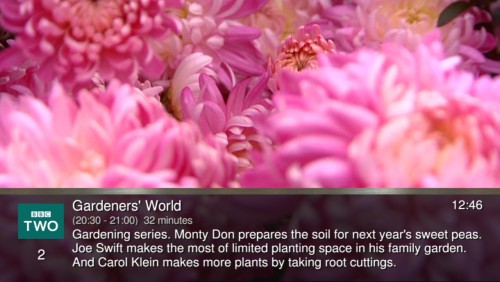 and the On Screen Menu will show.

to move up and down the menu. Use 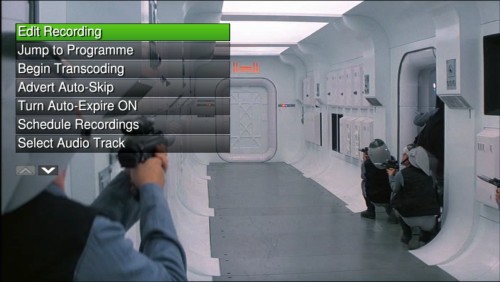 Select the Program Guide and the Full EPG will show. 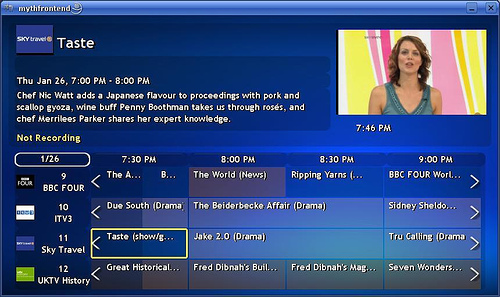 to move around the EPG

to switch to full-screen Live TV on the channel you selected, or just press

to go back to watching Live TV on your original channel.

The EPG also allows direct channel jumping by entering a channel number. By default, it is off. You can turn it on in the

When you press a number key MythTV gives you 2.5 seconds to enter additional digits, (These are displayed on screen as you press), after which it will jump to the closest channel it can find that matches the digits you have pressed.

If you have multiple tuner cards you can watch two channels at once using the Picture in Picture (PIP) facility. You can record one programme while you are watching another. Turn on the PIP via the Onscreen Menu by pressing the 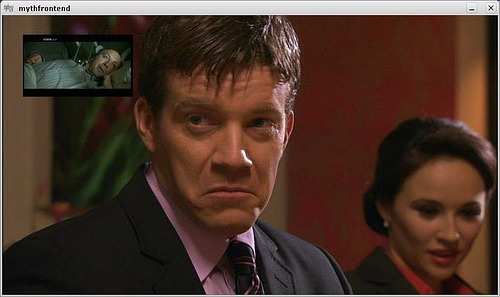 key to switch between your various tuner cards.