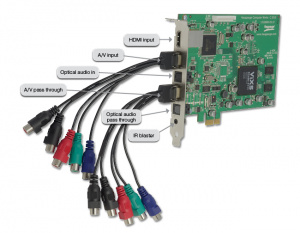 Warning: The first version of this card can not be utilized by MythTV, please read below for more details

The Hauppauge Colossus is a PCI-E x1 card that has component in/out, HDMI input, and an IR blaster. Although similar in concept to the externally housed Hauppauge HD-PVR, the chipset utilized on the Colossus is different. Because of this, drivers for Linux are not available due to a lack of documentation and support from the chipset manufacturer for support outside of the Microsoft Windows platform. Therefore, MythTV can not currently utilize this capture card and users are instead encouraged to continue to use the well supported Hauppauge HD-PVR which provides nearly the same functionality.

Hauppauge has released the HD-PVR2 and Colossus2. The "driver" for them is nearly identical and MythTV support is available by using an "external recorder": https://github.com/jpoet/HauppaugeUSB