In order to build FFmpeg using Visual Studio, we must still run FFmpeg's configure and make from a bash shell. This requires us to install MSYS/MinGW.

Here are a few details to note:

This guide used the latest build of mingw-get-setup.exe from the following site:

Defaults were used except the following:

On the Select Components screen, make sure to select MSYS Basic System and MinGW Developer ToolKit 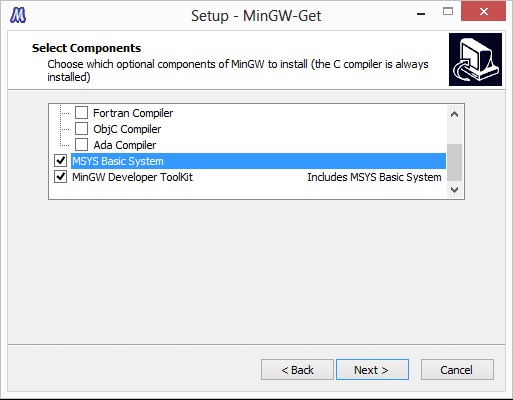 Once the installation is finished, we must make some changes to the environment.

We need to have the Visual Studio environment setup.

This will start a mingw shell with the environment setup to use visual studio.

3 - Then execute the following commands:

Find where mingw is getting link.exe from:

Rename link.exe to something else:

You can verify that you are getting Visual Studios version by running which again (Your path will vary based on where you have visual studio installed.

4 - Set the environment variable MINGW_INSTALLDIR to your MinGW install directory (in this example, c:\MinGW).